Scott Eldridge, Canarc’s CEO, stated: “Canarc is very happy to see such high gold recoveries from New Polaris concentrate using the BIOX process to bio-oxidize the refractory sulfides carrying the gold so that it can be recovered by conventional cyanide leaching. Using the BIOX process at New Polaris to produce dore bars at site is a potential game-changer for the project because it should obviate the need for road or barge access to ship the concentrates. BIOX could have a very positive impact on both the logistics and the economics of the New Polaris gold mine project.” 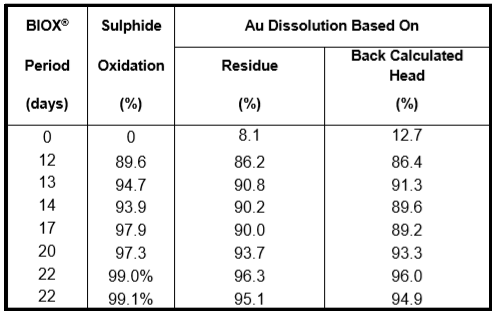 The BIOX bacterial oxidation process is currently used commercially to treat refractory gold deposits at ten gold mines on four continents, including the Fosterville mine of Kirkland Gold located in Victoria province of Australia. It has facilitated the production of more than 24 million ounces of gold over the last 25 years. Canarc’s metallurgical test program was conducted at the SGS Africa lab, located in Johannesburg, South Africa, under the supervision of Outotec RSA, owners of the BIOX technology.

The BIOX process has many advantages over other processes such as pressure oxidation and roasting for treating refractory gold ores. These include improved gold recoveries, significantly lower capital and operating costs, and being more environmentally friendly. BIOX is a robust commercial technology that is better suited for remote locations, it is simple to operate and is backed by 25 years of operating experience.

Canarc plans to undertake a new Preliminary Economic Assessment of the New Polaris project during the first quarter of 2019 incorporating the economic benefits of the BIOX process.

Garry Biles, P.Eng, President & COO for Canarc Resource Corp, is the Qualified Person who reviewed and approved the contents of this news release.

This news release contains “forward-looking statements” within the meaning of the United States private securities litigation reform act of 1995 and “forward-looking information” within the meaning of applicable Canadian securities legislation. Statements contained in this news release that are not historic facts are forward-looking information that involves known and unknown risks and uncertainties. Forward-looking statements in this news release include, but are not limited to, statements with respect to the future performance of Canarc, and the Company's plans and exploration programs for its mineral properties, including the timing of such plans and programs. In certain cases, forward-looking statements can be identified by the use of words such as "plans", "has proven", "expects" or "does not expect", "is expected", "potential", "appears", "budget", "scheduled", "estimates", "forecasts", "at least", "intends", "anticipates" or "does not anticipate", or "believes", or variations of such words and phrases or state that certain actions, events or results "may", "could", "would", "should", "might" or "will be taken", "occur" or "be achieved".