Vancouver, Canada January 31, 2017 Canarc Resource Corp. (TSX: CCM, OTC-BB: CRCUF, Frankfurt: CAN) announces its 2017 exploration program for the FG Gold property in which it can earn up to a 75% interest through an option agreement with Eureka Resources.

The exploration program will be conducted during the summer of 2017 with a budget of $500,000.

The 2017 exploration program will consist of diamond drilling on the most advanced prospective targets along the northwest extension of the Main Zone that have been identified and conducting soil sampling, prospecting and mapping to follow up on other highly prospective areas of the property that have been identified by geophysics work done on the property.

The 2017 program will focus on the following three target areas as shown on Map #1.

Six to eight diamond drill holes measuring 200 to 300 meters each, totaling approximately 2000 meters, will be drilled into the northwest extension zone and the northwest offset zone.

Previous geochemical surveys supports that the mineralized zone extends for an additional 3,000 meters from the northwest end of the Main Zone. The drill targets along this area have been identified by coincidental soil and electromagnetic anomalies completed in prior exploration programs. Mapping also supports the presence of similar lithologies to the main zone which contains the current historic resources.

Soil sampling will be completed to fill in areas in the vicinity of the northwest extension to fill information gaps in this area. An area measuring approximately 1500 by 1000 meters will be sampled on a 50m X 100 m grid generating approximately 250 to 300 soil samples.

Information from this program will identify other mineralized zones for follow up drilling and possible resource expansion.

Stream sediment, soil sampling, prospecting and mapping will be conducted along the southern limb of the Eureka syncline.

A 2016 interpretation study of a 2007 geophysical survey interpreted the presence of conductive EM responses to be that of a sedimentary rock package on the south east limb of the Eureka syncline similar to that which hosts gold mineralization within the main zone.

Information from this program will identify and develop targets for future follow up drilling in this newly identified target area of the property that has the potential to hold significant gold resource ounces.

Prospecting, mapping and sampling will be conducted in these areas to identify and develop targets for follow up drilling in these areas of the property that have received limited work in previous programs but have the potential to host significant gold resources. 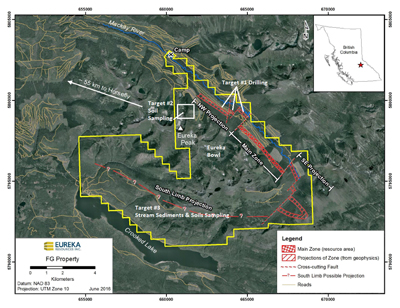 The FG Gold Project is located in the Cariboo Gold Camp, situated in the historic Quesnel Trough area of central British Columbia and has a long history of continued exploration since the 1970s. A combination of quartz veins and knotted phyllites host gold mineralization containing coarse free gold and finer grained sulphide bearing gold.

Garry Biles, P. Eng, President & COO for Canarc Resource Corp, is the Qualified Person who reviewed and approved the contents of this news release.

About Canarc Resource Corp. - Canarc is a growth-oriented, gold exploration and mining Company listed on the TSX (CCM) and the OTC-BB (CRCUF). The Company is currently focused on acquiring operating or pre-production stage gold-silver-copper mines or properties in the Americas and further advancing its gold properties in north and central BC.

Cautionary Note Regarding Forward-Looking Statements
This news release contains "forward-looking statements" within the meaning of the United States private securities litigation reform act of 1995 and "forward-looking information" within the meaning of applicable Canadian securities legislation. Statements contained in this news release that are not historical facts are forward-looking information that involves known and unknown risks and uncertainties. Forward-looking statements in this news release include, but are not limited to, statements with respect to the future performance of Canarc, and the Company's plans and exploration programs for its mineral properties, including the timing of such plans and programs. In certain cases, forward-looking statements can be identified by the use of words such as "plans", "has proven", "expects" or "does not expect", "is expected", "potential", "appears", "budget", "scheduled", "estimates", "forecasts", "at least", "intends", "anticipates" or "does not anticipate", or "believes", or variations of such words and phrases or state that certain actions, events or results "may", "could", "would", "should", "might" or "will be taken", "occur" or "be achieved".

Forward-looking statements involve known and unknown risks, uncertainties and other factors which may cause the actual results, performance or achievements of the Company to be materially different from any future results, performance or achievements expressed or implied by the forward-looking statements. Such risks and other factors include, among others, risks related to the uncertainties inherent in the estimation of mineral resources; commodity prices; changes in general economic conditions; market sentiment; currency exchange rates; the Company's ability to continue as a going concern; the Company's ability to raise funds through equity financings; risks inherent in mineral exploration; risks related to operations in foreign countries; future prices of metals; failure of equipment or processes to operate as anticipated; accidents, labor disputes and other risks of the mining industry; delays in obtaining governmental approvals; government regulation of mining operations; environmental risks; title disputes or claims; limitations on insurance coverage and the timing and possible outcome of litigation. Although the Company has attempted to identify important factors that could affect the Company and may cause actual actions, events or results to differ materially from those described in forward-looking statements, there may be other factors that cause actions, events or results not to be as anticipated, estimated or intended. There can be no assurance that forward-looking statements will prove to be accurate, as actual results and future events could differ materially from those anticipated in such statements. Accordingly, do not place undue reliance on forward-looking statements. All statements are made as of the date of this news release and the Company is under no obligation to update or alter any forward-looking statements except as required under applicable securities laws.