Vancouver, Canada – July 5, 2017 – Canarc Resource Corp. (“Company”) (TSX: CCM, OTC-BB: CRCUF, Frankfurt: CAN) announces that it has completed a detailed data review of the recently acquired, wholly owned Fondaway Canyon gold project in Nevada and has developed a new structural model for gold mineralization on the property. A Phase 1 exploration program is now underway including a ground magnetic survey and permitting for an 8-10 holes diamond drill program.

Re-analysis of the historic data together with on-going field mapping and sampling by Canarc's recently-hired Exploration Manager have resulted in the development of a new structural model that ties gold-mineralized zones to one main shear system structure and related dilational splays over a 3.5 kilometer (km) strike and up to 800 meter (m) width on the property.

The new model also highlights multiple areas with potential to expand the current gold resources by step out drilling along strike or down dip of the known gold zones, see diagram below. 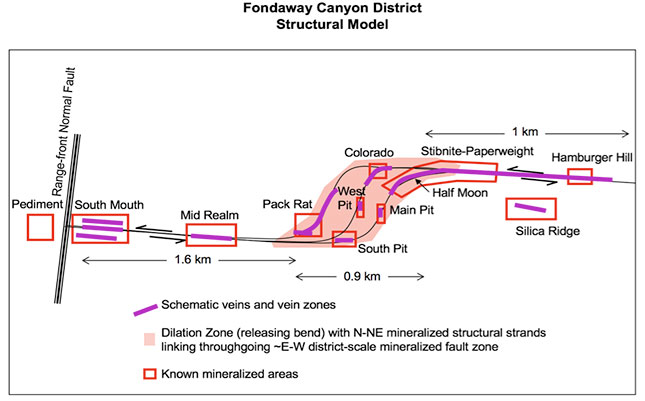 Gold mineralization is enhanced at the intersection between east-west shear veins and northeast extensional veins, especially in the corners of the dilation zone. A good example is historic drill hole TF-114 in the Colorado area, which intersected 7.41 grams per tonne (gpt) gold over 48.8 m including 15.2 m grading 17.61 gpt about 125 m below surface.

In other areas, such as Pack Rat and South Pit, little exploration has been conducted to follow up on gold mineralization intersected over broad widths in shallow historic drilling (e.g. hole TF-250 returned 38.1 m grading 2.80 g/t Au including 12.2 m grading 5.45 g/t about 50 m below surface). Mineralization in all areas remains open at depth.

A ground magnetic survey, consisting of 179 line kilometers with 50 m line spacing, is now underway to assist in mapping structures and delineating mafic dikes, which are an important component to the structural system. The results of the magnetic survey along with on-going field mapping and sampling will be integrated into the property database to help refine specific drill targets.

An exploration notice has been submitted to the U.S. Bureau of Land Management. The notice includes up to 10 preliminary drill sites as well as access road construction as needed. The drilling program is scheduled to begin in September 2017. Further details of the drill targets will be released at that time.

Canarc’s main exploration objectives at the Fondaway Canyon gold project in 2017 are to expand the shallow gold resources amenable to open pit mining and refine the metallurgical recoveries to produce high-grade flotation concentrates.

In order to focus on existing wholly owned projects, the Company has terminated its Option agreement with Eureka Resources to acquire an interest in their FG Gold project in BC.

Dr. Jacob Margolis is a qualified person, as defined by National Instrument 43-101, and has approved the technical information in this news release. Dr. Margolis is engaged as a consultant to Canarc Resource Corp.