* True widths of mineralization are estimated to be about 35% in hole FC17-1 and 90% (FC17-2 and FC17-3) of reported core lengths. True widths estimates are preliminary and are subject to the results of further 3D modeling.  Full results are presented in Table 1.

Catalin Kilofliski , CEO of Canarc , stated: "The results of the first three drill holes are very encouraging in terms of the mineralization widths and grade and have significantly extended the depth of the known mineralization.  It is becoming clear that Fondaway Canyon offers the potential to develop bulk tonnage gold mineralization suitable for open pit mining.

The drill program wrapped up last week, the remaining core samples have been cut and shipped, and we expect to release assays for holes 4-7 in early January 2018.  At that time, we will begin the evaluation of an open pit mining potential at Fondaway and will prioritize the target zones for a possible Phase 2 drill program next year.”

The broad zones of mineralization intersected in the first three holes extend the previous mineralized zones to depth and, together with previous exploration results, define bulk tonnage mineralization that may be amenable to open pit mining.  Previous efforts in the district focused on exploring narrow high-grade zones.  Assays are pending on the remaining four holes and should be made available in early January 2018.

Hole FC17-1 (365.8 m, N42oW/-50o) tested the Pack Rat target, where a northeast-striking quartz-vein stock-work and shear zone system had been explored by previous shallow drilling that included hole P-19 with 4.2 gpt Au over 10.7 m and hole TF-296 with 3.1 gpt Au over 18.3 m. Hole FC17-1 tested below these previously drilled holes and intersected several high-grade zones, including 3.74 gpt Au over 6.1 m containing 14.2 gpt Au over 0.6 m.  Significantly, the hole bottomed in 30.1 m grading 1.45 gpt in a quartz-vein stock-work within black shale containing very fine-grained "sooty" pyrite at the bottom of the hole.  This intersection extends mineralization 200 meters down the dip of the vein system.  The Pack Rat zone is open to the northeast and southwest along strike and is at least 225 m long.  Mineralization is contained within a steeply-dipping zone about 180 m in width that has now been traced down dip for 375 m and remains open at depth.

Preliminary modeling indicates that mineralization at Colorado lies within a south-dipping corridor that is approximately 150 m thick and can be traced down dip from surface for approximately 450 m. 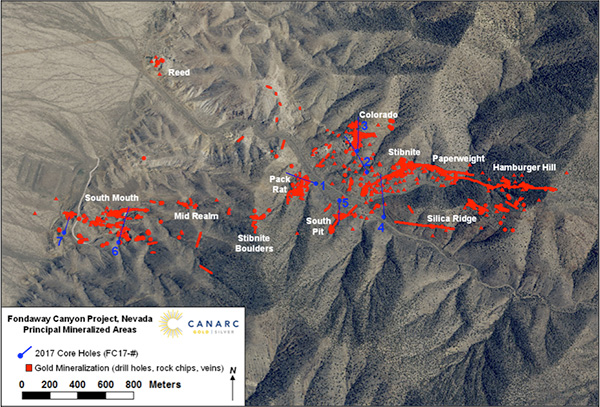 Dr. Jacob Margolis is a qualified person, as defined by National Instrument 43-101, and has approved the technical information in this news release.  Dr. Margolis is engaged as a consultant to Canarc Resource Corp as US Exploration Manager.

The Company employs a rigorous QAQC protocol, including insertion of control samples at a rate of 1 per 100 feet of core, or approximately 1 per 22 samples.  Control samples include a blank and four gold standards at various grades.  Samples were processed by Bureau Veritas Minerals, an ISO-certified lab that meets the requirements of ISO/IEC 17025:2005 and ISO 9001:2015, and employs its own QAQC procedures, including duplicate analyses of core pulps and rejects and insertion of its own standards and blanks.  No significant discrepancies were found in the assay results to date.

The Fondaway Canyon project consists of 136 leased unpatented mining claims covering 2,220 acres in Churchill County, Nevada, 70 kms northeast of Fallon.  A NI-43-101 technical report, completed in April, 2017, prior to the drilling reported here, and available on SEDAR, reported an indicated resource of 2.05 million tonnes grading 6.18 gpt containing 409,000 ounces of gold and an inferred resource of 3.20 million tonnes 6.40 gpt gold containing 660,000 ounces of gold.  This estimate does not include all mineralized areas in the project, such as the Pack Rat area tested by hole FC17-1.  The project contains a gold-bearing shear-zone system that is at least 3.8 km long and up to 1 km wide.