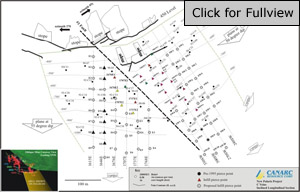 Canarc owns a 100% interest (subject to a 10% net profit royalty) in the New Polaris property, a former high-grade, underground gold mine that produced 231,000 oz of gold between 1939 and 1951. From 1990 to 1997, Canarc invested over CA$15 million exploring New Polaris to outline an historic resource of 1.3 million oz gold contained within 3.6 million tons grading 0.36 oz per ton (3.3 million tonnes grading 12.3 gpt) which preceded and is not compliant with NI 43-101 and therefore should not be relied upon.

After completing a new resource estimate, Canarc plans to refine the conceptual mine plan, complete an initial economic evaluation and enter into the provincial mine development permitting process in the fourth quarter of 2006. The New Polaris project should then move to a full feasibility study and final permitting in 2007.