Assay results for the ten drill holes are shown in the table below.  Maps and sections can be viewed on our website: http://www.canarc.net.

Please click here for a video commentary on this news release.

True widths are greater than 90% of core lengths, except for holes 7 and 8, where they are approximately 75%.

“The 2009 drilling program consistently intersected and extended known gold mineralization by 50-100 m along strike and down dip from the three gold zones previously defined within a 3 km MaxMin geophysical anomaly that trends parallel to a large intrusion.  In general, our drilling hit broader zones of lower grade gold mineralization compared to the previous drilling.  Higher grades appear to be associated with higher temperature quartz-pyrrhotite gold mineralization.

These 2009 drill holes are still 1000 m east of the intrusive contact and have yet to test the full length of the MaxMin anomaly. Combine these factors with the existence of two other intrusive bodies, and numerous other untouched geophysical and geochemical anomalies and it is safe to say we have many attractive targets that we are looking forward to testing with the next exploration program.”

The Tay–LP property consists of 413 claims covering a 20 km-long by 4 km-wide belt of gold prospects (approximately 80 sq. km or 8,000 hectares) that were first discovered by prospecting in 1984. Tay-LP enjoys good road access from both Ross River and Whitehorse via the South Canol Road and a four-wheel drive access road to the old camp on Seagull Creek.

Several million dollars are estimated to have been spent on exploration since 1984 by Cominco (1984-87), Pacific Comox (1988-99), Newmont (2000-01) and Ross River (2002-04). As a result, Canarc has inherited a large exploration database, including 1382 km of airborne geophysical surveys, 3 geochemical soil grids, 2 ground geophysical grids, 12 reverse circulation drill holes, and 53 diamond drill holes.

Gold mineralization at Tay-LP shares some geological similarities with other recent gold discoveries within the Tintina Gold Belt, such as the Rau property of Atac Resources (ATC: TSX-V) and the Ketza River gold deposit of Yukon-Nevada Gold (YNG: TSX), which is located only 18 km east of Tay-LP. Gold at Tay-LP is associated with sulphide minerals (mainly pyrrhotite) in quartz breccias (containing elevated bismuth and tellurium) replacing favourable structures and strata within Cambro-Ordovician calcareous phyllites and marbles proximal to Cretaceous quartz monzonite stocks and sills. 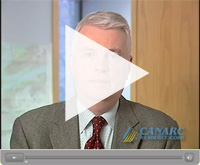 Canarc has an option to acquire up to a 100% interest in Tay-LP from Ross River Minerals Inc. over a three year period, subject to a third party 3% NSR royalty. Pursuant to the NSR royalty agreements, Canarc must pay CA$25,000 per year in cash or stock as annual advance payments. The TSX has approved the issuance of 160,250 shares to settle the 2009 advance royalty payment.

James Moors, B.Sc., P.Geo, is the Qualified Person who supervised the 2009 drilling program on the Tay-LP property.  He instituted a Quality Control sampling program of blanks, standards and duplicates to ensure the integrity of all assay results.  All drill core was split by Canarc personnel at the Tay-LP camp, secured in tagged bags, and then trucked to the prep lab of  ALS Global in Terrace, British Columbia.  The core samples were dried, crushed, and split. A 30-gram subsample was shipped to the ALS Global lab in North Vancouver for analysis.  Gold content was determined by fire assay with an atomic absorption finish (FA-AA), and samples containing greater than 0.5 gpt Au were subjected to a second gravimetric finish. Other trace elements were analyzed by atomic absorption.  ALS Global also uses its own standards for quality control checks.

Canarc Resource Corp. is a growth-oriented, gold exploration company listed on the TSX (CCM) and the OTC-BB (CRCUF).  Canarc is currently focused on seeking a partner to advance its New Polaris gold mine project in north-western British Columbia to the feasibility stage and on acquiring attractive new gold exploration and mining projects in North America.  Barrick Gold Corp. is a shareholder.