“These are classic ingredients for Archean orogenic gold deposits such as Agnico Eagle’s Meliadine and Meadowbank deposits now in production in the Rankin greenstone belt some 500 km northeast of Hard Cash, which is located within the Ennadai greenstone belt.  We plan to spend CAD$200,000 this summer on geological mapping and geochemical rock and soil sampling to define targets for drilling.”

The Total Magnetic Intensity (TMI, link 1) is used to broadly interpret lithological units and structural fabric. It shows a strong northeast-striking linear structural fabric that coincides with the strike of the main metavolcanic and metasedimentary units.

Five main magnetic domains trend northeasterly across the property and can generally be correlated with the main rock units shown on the Geological Survey of Canada regional geological map of the area.  From northwest to southeast, these are:

The First Vertical Derivative (FVD, link 2) is used to interpret primary and secondary structures or breaks and it shows four main linear trends:

A secondary linear zone of copper-arsenic-tungsten-gold prospects is situated 3.5 km west of the Swamp zone along the southern margin of a linear magnetic high marking the contact of Domain 2 felsic metavolcanics and felsic metavolcanics, also crossed by the main WNW structure.

One other magnetic feature worth noting is a 2.5 km long ovoid magnetic low whose core is marked by a linear of spot magnetic highs located about 6 km west of the Swamp zone within the Domain 2 felsic metavolcanics.  No geological information is known about this feature.

The total count (TC), uranium (U), thorium (Th) and potassium (K) channels are all anomalously high over the Domain 1 paragneiss and Domain 5 granitic intrusions and confirm the magnetic interpretations of these lithologies.  Radiometrics may be useful in confirming intrusions or alteration zones at the local scale identified by more detailed mapping. Elemental radiation is detected over land and is masked by water and overburden, so given the lakes and glacial overburden covering much of the property, radiometrics do not provide complete coverage in interpreting structures.

The Hard Cash property exhibits many of the characteristics of Archean orogenic gold deposits (link 3) typical of greenstone belts in Canada and elsewhere.  Hard Cash has several geological characteristics similar to the new Dixie Property discovery (Great Bear Resources) near Red Lake as well as the operating gold mines of Agnico Eagle (Meliadine and Meadowbank) in Nunavut.  These characteristics include: 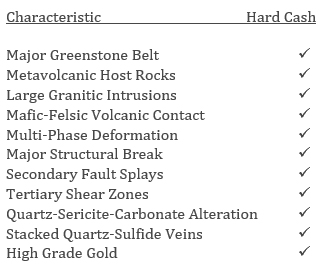 At Hard Cash, the main Swamp high grade gold vein zone (link4) has been traced continuously over 1.3 km and the secondary 4600 and Pond prospects have the potential to extend it by another 2 km to the southwest.  This gold trend is open-ended.

Historic bedrock grab samples at the 4600 and Pond prospects assayed up to 27.7 gpt and 11.4 gpt gold respectively.  Historic float samples from two boulders located over 2 km south and southwest of the Swamp zone returned grades up to 6.81 gpt (Malachite prospect) and 12.45 gpt (PD2 prospect) gold respectively and a large boulder 450 metres southeast of the Swamp zone returned a grade of 95.7 gpt gold.

Canarc considers all of the above assay results to be historical, Canarc's consulting geologist visited the property for a day in 2018 and sampled similar high-grade gold assays in rock chip samples including 72.6 gpt gold in float and 14.6 gpt gold in bedrock at the Swamp zone, but Canarc has not completed sufficient work to independently verify all of these historical results.

Canarc plans to commence a CAD$200,000 Phase 1 exploration program in July to include reconnaissance prospecting of the Hard Cash property and detailed geological mapping, geochemical rock and soil sampling along the main Swamp high grade gold vein zone and southwest along the main break for a total of four km (link 5).

The goals of the Phase 1 exploration program are to evaluate the many gold prospects and related geological and geophysical features on the property, gain a detailed understanding of the lithological and structural controls on gold mineralization and define top priority targets for drilling.

Dr. Jacob Margolis is a qualified person, as defined by National Instrument 43-101, and has approved the technical information in this news release.  Dr. Margolis is engaged as a consultant to Canarc Resource Corp as Vice President of Exploration.