August 21, 2006 - Vancouver, Canada - Canarc Resource Corp. (CCM: TSX and CRCUF: OTC-BB) announces that the 2006 infill drilling program has returned some of the best holes yet in the C vein system on the New Polaris property in northwestern British Columbia.

For drill hole locations, refer to the C Veins Longitudinal Section on Canarc’s website - New Polaris Project. All previous drill holes are shown as solid circles, proposed 2006 hole locations are shown as open circles and the holes reported in this news release are shown as stars. Note that this year’s drill hole numbers refer to location along the section lines, not chronological sequence. Therefore, previous drill holes located along the section lines will cause some gaps to appear in this year’s drill hole number sequence. True widths are estimated to be 70 to 75% of core lengths.

These latest drill results confirm that the C vein system is thickening to the northeast and at depth, beyond the area previously drilled. Because the gold resource is wide open in this area, management is now considering a significant expansion of the 2006 work program, as follows: 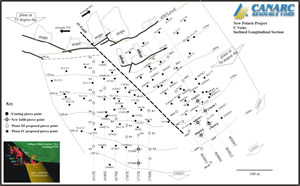 Bradford Cooke, Chairman and CEO, stated, “ We are very encouraged by these latest drill results, the best of the 2006 infill drilling program so far. In the 1990’s, Canarc drilled similar thick C vein intercepts in the southwest portion of the C vein zone but this is the first time we have seen such thick, rich intercepts towards the northeast, outside of the area previously drilled. Because of the excellent potential for finding substantial new resources at depth on the C veins, management is now looking at expanding the 2006 work program.”

James Moors, B.Sc., P.Geo, Vice President, Exploration, is the Qualified Person supervising the 2006 drill program on the New Polaris property. He has instituted a Quality Control sampling program of blanks, duplicates and standards to ensure the integrity of all assay results. All drill core is split by Canarc personnel at the New Polaris camp, and then flown to Vancouver for assay by ALS Chemex. The core samples are dried, crushed, split and a 30-gram sub-sample is taken for analysis. Gold content is determined by fire assay with a gravimetric finish on samples containing greater than 1 gpt Au, and other trace elements are analyzed by atomic absorption. ALS Chemex also uses its own standards for quality control checks.

Canarc Resource Corp. is a growth-oriented, gold exploration and mining company listed on the TSX (symbol CCM) and the OTC-BB (symbol CRCUF). The Company’s principal assets are its 100% interest in the New Polaris gold deposit, British Columbia and its 80% option on the Benzdorp gold property in Suriname. Major shareholders include Barrick Gold Corp. and Kinross Gold Corp.