September 18, 2006 - Vancouver, Canada - Canarc Resource Corp. (CCM: TSX and CRCUF: OTC-BB) announces that visible gold has been intersected by recent drilling in a high grade drill hole at the New Polaris project in northwestern BC. This hole marks the first-ever occurrence of visible gold in drill core since Canarc began work on the project in 1990.

Assays are as follows:

For drill hole locations, refer to the C Veins Longitudinal Section on Canarc’s website - New Polaris Project. All previous drill holes are shown as solid circles, proposed 2006 hole locations are shown as open circles and the hole reported in this news release is shown as a star. Note that this year’s drill hole numbers refer to location along the section lines, not chronological sequence. Therefore, previous drill holes located along the section lines will cause some gaps to appear in this year’s drill hole number sequence.

It is still too early to determine how extensive or meaningful this style of stibnite-visible gold mineralization is relative to the main C vein system. However, drill hole, 1615E9, located 100 m deeper along the same grid line as hole no.1615E8A, has also intersected visible gold in a similar semi-massive stibnite (quartz-carbonate) vein. The extent of this new type of mineralization therefore remains open to the west and at depth. Assays for drill hole 1615E9 are expected within the next two weeks.

Because of the visible gold, these drill cores were prepared differently for assay than the normal cores in order to minimize the nugget effect. Core samples were dried, crushed, split and a 1000 gram sub-sample taken for analysis. Each sample pulp was passed through a 100mm (Tyler 150 mesh) stainless steel screen. Any material remaining on the screen (+100mm fraction) was retained and analyzed in its entirety by fire assay with gravimetric finish and reported as the Au (+)fraction. The material passing through the screen (‑100mm fraction) was homogenized and two sub-samples were analyzed by fire assay with AAS finish. The average of the two AAS results is taken and reported as the Au (-100)fraction result. All three values are used in calculating the combined gold content of the plus and minus fractions. In the assayers report, the gold values for both the +100 and -100 micron fractions are reported together with the weight of each fraction as well as the calculated total gold content of the sample.

A non-independent NI 43-101 report documenting exploration is currently in preparation and will be filed by mid October.

James Moors, B.Sc., P.Geo, Vice President, Exploration, is the Qualified Person supervising the 2006 drill program on the New Polaris property. He has instituted a Quality Control sampling program of blanks, duplicates and standards to ensure the integrity of all assay results. All drill core is split by Canarc personnel at the New Polaris camp, and then flown to Vancouver for assay by ALS Chemex, who use their own standards for quality control checks as well.

Canarc Resource Corp. is a growth-oriented, gold exploration and mining company listed on the TSX (symbol CCM) and the OTC-BB (symbol CRCUF). The Company’s principal asset is its 100% interest in the New Polaris gold property, British Columbia. Shareholders include Barrick Gold Corp. and Kinross Gold Corp. 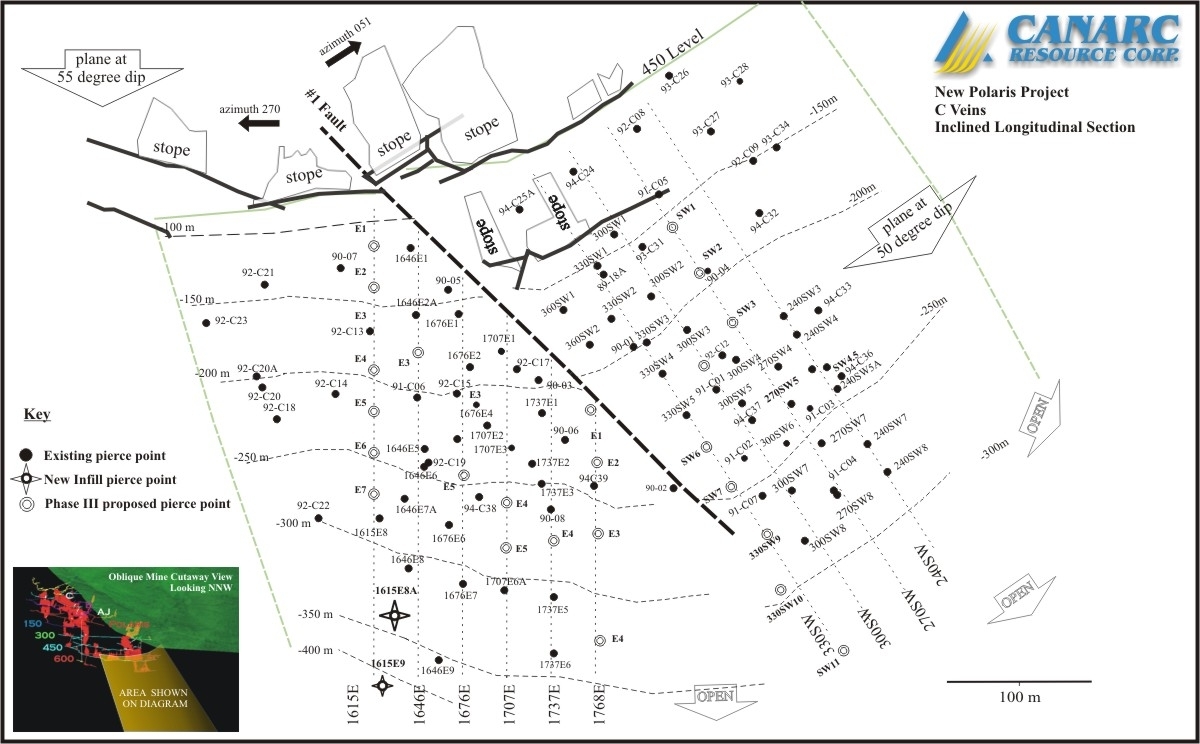