Fondaway Canyon is an advanced stage gold property located in the Churchill County, Nevada. The land package contains 136 unpatented lode claims. The property has a history of previous surface exploration and mining in the late 1980’s and early 1990’s.

Techbase International of Reno, Nevada completed the technical Report for the Fondaway Canyon Project. The updated resource estimate included in the technical report is shown in the table below.

The Fondaway Canyon mineralization is contained in a series of 12 steeply dipping, en-echelon quartz-sulfide vein-shear zones outcropping at surface and extending laterally over 1200m and vertically to depths of > 400m. The Paperweight, Half-moon and Colorado zones host the bulk of the resources, with the remainder in parallel veins or splays of the major vein-shears.

A total of 591 historic drill holes were validated for resource estimation, with coordinate information and down hole assays. These included 8411m of core drilling in 49 holes and 40,675m of RC drilling in 551 holes. Drill core was inspected at the Fallon, NV storage facility and assay certificates were viewed to verify gold intercept grades used in the estimate.

A Mineral Resource was estimated for each vein using polygonal estimation on drill intercepts projected onto a vertical long-section parallel to the average strike direction of that vein. The polygons were truncated at faults that were interpreted to limit the extent of the mineralization.

The Mineral Resources are reported at a cut-off of 3.43 g/t, over a minimum horizontal width of 1.8m, based on projects of similar size, a gold price of $US 1,225 per oz, a metallurgical recovery of 90%, and an underground mining method suitable for steeply-dipping veins. A processing method has not yet been selected.

No capping or cutting of grades was applied. The assayed grades were found to be very consistent when compared to check assays and duplicates, as well as between twinned holes. The consistency in assay results was interpreted as being due to the very fine-grained nature of the gold mineralization (1 to 10 µm). This consistency provided confidence that the higher-grade assays were reasonable.

Figure 1 shows the location by zone of the Fondaway Canyon resources. 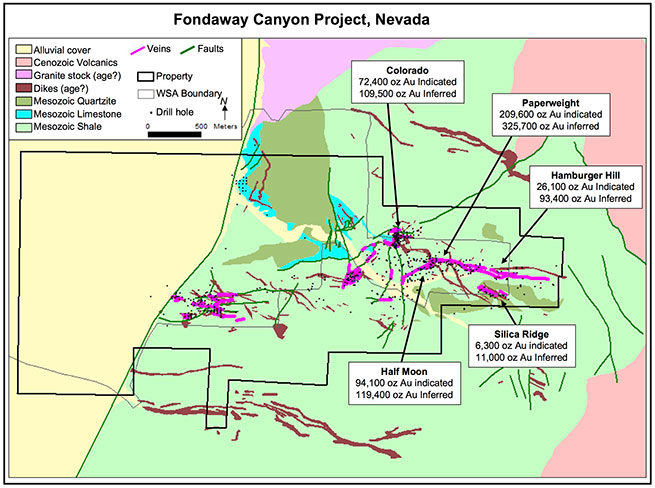 The current Mineral Resource estimate relates only to the eastern half of the 4000m east-west striking mineralized system, and does not include any estimates for near-surface, oxide mineralization. Significant exploration potential remains both in the eastern section, and relatively untested western zone.

Multiple exploration targets have been identified along favorable structural extensions that have potential to host additional significant gold resources.  A 30-hole drill program, estimated to cost $2.0 million, has been recommended by Techbase International to explore these identified targets as well upgrade more of the resources into the indicated category.

Dixie Comstock, also located in the Churchill County, Nevada, consists of 26 unpatented lode claims. It also has evidence of some historic mining but no records of production are available.

A historic 1991 geologic and mining study completed by Mine Development Associates of Reno, Nevada, in March 1991 estimated a geologic resource containing 146,000 ounces of gold in 4.26 million tonnes grading 1.063 g/t Au at a cut-off grade of 0.34 g/t Au.

Clear Trunk property is located in Pershing and Humboldt Counties, Nevada on 4500 acres of fee mineral and unpatented claims in the Sonoma Range, south of Winnemucca.

Historic mining at the Bull Run mine developed 1 to 2 m wide quartz veins with 17 g/t Au before it closed in 1901.

A large quartz silver-gold vein system has been identified over a mile in length, 12 m wide, with silver grades from surface samples up to 685 g/t and up to 5.1 g/t gold.

Future exploration work has the potential for new gold and silver bonanza-grade discoveries.

The property contains mafic dikes and sills with gold up to 3.4 g/t. Three shallow holes at north end of the property intercepted up to 1 g/t Au.

Jarbidge property is located in Elko County, Nevada on 8 patented claims along the east end of major gold veins in the Jarbidge mining district.

Veins that have historically produced over 400,000 ounces of gold strike directly onto the property and gold soil anomalies identified on the property need to be drill tested.

The property has 3 quartz-adularia-gold veins that are 2 to 6 m wide and over 1200 m long hosted in Precambrian siltstone and rhyolite with historic surface samples up to 21 g/t Au.

Historic samples have been collected from jasperoid veins with Silver values up to 480 g/t.

Previous exploration focused on low grade gold values but the property was never been explored for silver.

The property contains two veins and a quartz breccia in altered shale adjacent to intrusive dikes.  Gold values grading up to 8.6 g/t have been collected in historic surface sampling of quartz veins.

Silver Peak property is located in Esmeralda County, Nevada on 2 patented (40 acre) mining claims. The property is surrounded by Scorpio Gold claim block at the currently operating Mineral  Ridge mine.